CleanFund Closes the Largest C-PACE Deal Ever in the Country 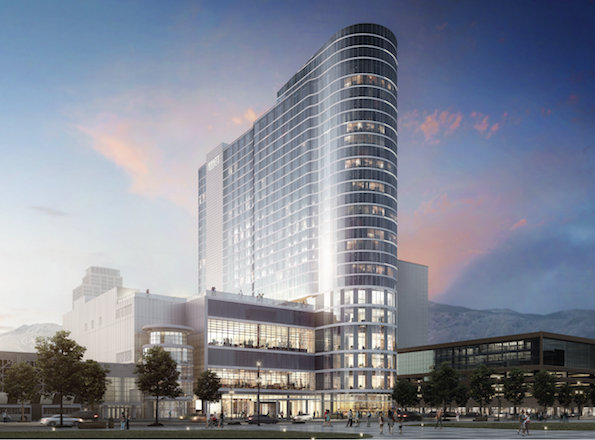 Utah’s Revamped C-PACE Legislation Enables the Most Powerful Public-Private Partnership in the Country, Opening up a Significant Amount of Low-Cost Capital Geared Towards New Development and the Revitalization of Commercial Buildings Throughout the State

With the city’s revamped C-PACE program, Salt Lake City is in a position to lead the country in renewables and carbon reduction. Under Mayor Jacqueline Biskupski’s leadership, Salt Lake City has set aggressive sustainability goals for 2030 to be 100% renewable by 2030 and cut carbon emissions by 80% by 2040. Mayor Biskupski said “C-PACE was the lowest cost of capital for the developer, Portman Holdings, which enabled the project to proceed. We expect that C-PACE is going to be a catalyst to enable the City to meet our sustainability goals.”

Opening in 2022, the Hyatt Regency Salt Lake City will be the first 4-star large hotel delivered to thriving Salt Lake City since the City hosted the 2002 Winter Olympic Games. The 700-room upscale, full-service hotel will be located in downtown Salt Lake City and will serve as the Salt Palace Convention Center’s on-site hotel. Projects like this are designed to meet the demand for large capacity hotels for Salt Lake City’s growing convention industry.

CleanFund’s contribution to the $377 million in total project costs will be used to fund C-PACE eligible energy efficiency improvements such as heating and cooling systems, interior lighting and equipment, fans, heat rejection, pumps, and water systems. As a result, the hotel’s energy performance is projected to exceed the energy code compliance level by over 20 percent.

“The project has always had an ambitious construction and capital plan”, said Portman Holdings President, John Portman, IV. “We were fortunate enough to work with talented and capable people with the City and County to learn what sustainable financing resources were available to the project. Once we were introduced to C-PACE, we immediately saw the opportunity to cost-effectively fund the sustainable elements of the project. CleanFund provided the capital in an upfront manner and was a delight to work with. We are very pleased with how they approached the deal and the partnership, especially given the overall complexity of the project.”

Salt Lake City wanted the project to move forward and with no further tax incentives available, they reached out to the Utah C-PACE program. “We recently redesigned the Utah C-PACE program with new legislation that not only addresses the potential credit risks of C-PACE and enabled the program to work as it was originally intended. The goal of the C-PACE program is to make it easy and affordable for Utah’s commercial buildings owners to invest in upgrades that will not only benefit their bottom line and their tenants, but also the planet,” said Theddi Wright Chappell, Director of the Utah C-PACE Program.

C-PACE is the ideal financial tool for large projects that need cost-effective capital and incentives to make the needed energy efficiency and clean energy improvements. Woolsey McKernon, Managing Director for CleanFund said, “The Hyatt Regency Salt Lake City project was the most heavily sought-after project with an extremely competitive RFP process. In the end, CleanFund provided the most attractive financing package that worked for Portman Holdings.” The CEO of CleanFund, Lain Gutierrez, added, “This transaction demonstrates that C-PACE fits well within a highly structured capital stack for large marquee projects. I’m also pleased to see C-PACE has matured to the point that a top-tier developer such as Portman Holdings would choose to incorporate C-PACE in its financing.”

The City plans to host a ceremony on January 10th to celebrate the groundbreaking of the Hyatt Regency Salt Lake City and the largest C-PACE deal in history.

Throughout the past 62 years, Portman Holdings has developed over 65 million square-feet of premium real estate around the world with a focus on hospitality, office and mixed-use properties. The vertically integrated real estate development, investment and management company commands a successful global network and has a proven track record with the world’s top financial institutions. Teams in the company’s global offices seamlessly connect to develop, finance and manage a diverse portfolio in the world’s core and emerging markets. Portman Holdings continues to achieve success through investor, partner and client relationships that deliver exceptional real estate projects. For additional information, visit www.portmanholdings.com

New York Times "To Meet Demand for Green Buildings, Developers Get a Leg Up"

CleanFund Provides $7.8 Million for Upgrades to the Historic Garland in Downtown LA